Hunting Park, a low-income, largely minority neighborhood in North Philadelphia, has long been home to a disproportionate number of polluters. The Law Center first partnered with Hunting Park residents in 1986 when a company planned to open a facility to treat toxic wastes in the middle of the neighborhood. We provided legal and technical assistance, and we helped the community secure additional safeguards and citizen oversight of the facility’s emissions.

The Law Center again partnered with the Hunting Park community in 2001, when a company dumped a 100-foot-tall mountain of demolition waste in the neighborhood. Grind the materials into cement, the company created a wave of dust and debris that coated Hunting Park and filled the air – and the lungs of Hunting Park residents. The community’s outrage and the threat of litigation convinced the company to move the waste out of Hunting Park just two days later.

The Law Center represented the Hunting Park Stakeholders Group, a group of local residents and activists concerned with the environmental health of their community. Suffering from clustered industrial sites, we provided technical and legal assistance to help stop further pollution in the neighborhood. With the Stakeholders Group, we also secured an EPA Environmental Justice grant to create community gardens, which will reclaim vacant land and transform it into green space to benefit the community. 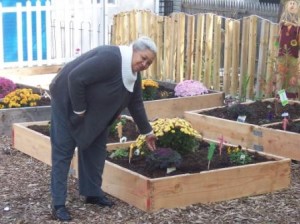 Staff on the Case