Half of PA’s Schools Fail to Meet State Proficiency Targets

A Law Center analysis of the 2013 state proficiency exam testing results shows a widespread and growing inability of public schools to prepare a significant portion of their students to meet the state’s educational standards in reading and math.

The analysis includes all public schools, including those that are district run, charters, and a few other non-district schools reporting results on the PSSA and Keystone proficiency exams. The results are significant because these failures are not confined to a relatively few “ineffective” districts and because the number and percentage of schools unable to meet the current state standards for proficiency has increased over the last three years.  This analysis shows Pennsylvania has a long way to go before it is able to provide an adequate education in all schools so that students can meet state standards. 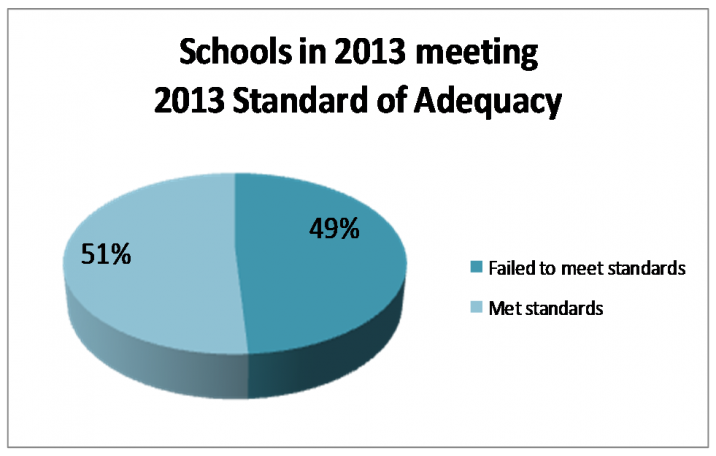 Reading/Literature of 70% and in Math/Algebra 1 of 73% on the state proficiency exams. In other words, schools are not meeting the adequacy goal if 27% or more of their students were not proficient in Math, or if 30% or more of their students were not proficient in Reading.  Based on that standard, almost half (49%) of the 2,908 schools reporting test results are not at adequacy level.  There were 897 schools which did not have the targeted number of students meeting those proficiency levels in both subjects, with another 269 schools failing to meet the proficiency standard in in Reading/Literature and 256 schools failing to have the targeted percentage of students reach proficiency only in Math/Algebra 1. These schools were spread across the state in 72% of the school districts (357 out of 499), as well as in 143, or 79% of the charter and other non-district public schools.  Inadequate results are not confined to a few distressed schools.

This adequacy target, 70% of a school’s students proficient or above in Reading and 73% in Math, is a significant reduction from the 2011-12 targets of 78% proficient in Reading and 81% in Math set by the Commonwealth.  If that same standard had continued to apply, more than three –quarters (79% or 2,287 schools) of the 2,908 schools reporting test results in 2013 would have failed.  In 1,406 schools this year students did not meet those targeted proficiency levels in both subjects.  In 787 more schools the targeted number of students failed to meet proficiency standards just in Reading/Literature, and 94 schools failed to have the targeted percentage of students reach proficiency only in Math/Algebra 1.  These schools with inadequate numbers of students achieving the 2012 proficiency standards were spread across the state in 95% of the school districts (473 out of 499), as well as in 168, or 98% of the charter and other non-district public schools.

The percentage of all students in the state scoring proficient and advanced on the PSSA/Keystone exams have been declining over the last three years as the exams have changed and as instructional funding has been cut.

If we look at the number of schools which failed to meet even the newly reduced adequacy targets we see it has been increasing.

This analysis throws into sharp relief how schools are doing at preparing students to meet the standards that the Pennsylvania State Board of Education has determined all students should know.  It is important to recognize that the state has reduced the goal (now called the Annual Measurable Objective) for its schools, essentially setting it at the statewide percentage of all students scoring proficient or above in the 2013 exams.  Since that average is lower than in former years, the state has adopted a lower standard than it was formerly meeting.  How schools are doing in preparing students to meet the state proficiency standards is a critical measure because the manner in which the state itself now evaluates schools—the new school performance index—dilutes academic performance as a factor.  Under the index, the number of students who are proficient on state standards accounts for only 40% of a school’s index score.  The index also factors in other criteria, such as whether the school is making progress in improving, or making progress in closing the gap of historically under-performing students, and how the school does on attendance, graduation and promotion rates.  While these other factors  are appropriate for evaluating educator effectiveness, they do not tell us whether a school is actually meeting state adequacy standards or what percent of its students meet state performance standards.  In assessing whether the state has a “thorough and efficient system of public education serving the needs of the Commonwealth” the critical factor is whether students actually meet the standards which the state has deemed as showing an acceptable level of proficiency.

Results were reported on the 2013 PSSA/Keystone exams from 2,908 schools in Math and Reading. They show: