The Law Center is sorry to report that our former colleague, Jerry Balter, has died at age 94. His contribution to the Law Center and to the development of environmental law to serve our community during the 28 years he spent at the Law Center was extraordinary. But that was only the second half of a remarkable life. 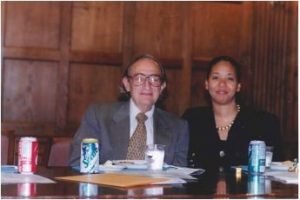 In the first half, Jerry was an industrial engineer and activist. Born in New York City, he served in World War II, where he was a prisoner of war. When he returned to the states he married Ruth, and they later moved to Rochester where professionally he designed supermarkets. While there he was a civil rights activist on school integration, then an anti-Vietnam war activist and anti-war candidate for Congress, and then an advocate for the Attica prisoners. It was the later experience which led him to move to Philadelphia to attend Rutgers Law School. It is wrong, of course, to divide his life into two pieces, because he was always an activist and in both parts there was Ruth, who herself is an exceptional person.

Jerry started at the Law Center in 1978 at age 54, shortly after he graduated from Rutgers. He was originally hired to work on an Environmental Protection Agency (EPA) funded project analyzing cancer statistics for geographic abnormalities. His first major project was drafting and shepherding through to passage a Philadelphia City “Right To Know” ordinance so the public and city safety officials could know what chemicals were being used or stored by businesses in the City. It was the first such ordinance in the country. 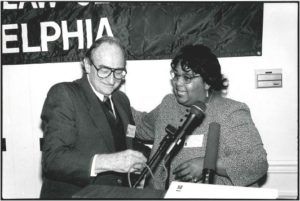 Jerry worked closely with a coalition of fire and safety officials and with union organizers in the Philadelphia Area Project on Occupational Safety and Health. Industry opposition was intense and Mayor William Green initially opposed important parts, but the coalition prevailed. Jerry was then asked to work with a bi-partisan coalition in New Jersey for similar statewide legislation which he drafted. At that time New Jersey was the most industrialized state in the country and the bill again faced heavy opposition. Upon its passage, the industry filed suit in federal court claiming it was preempted by federal environmental laws. Jerry headed the successful defense of the statute. As numerous other states and cities began copying and varying this legislation, the industry opted for uniform reporting requirements under federal law resulting in national disclosure rules similar to those in his original legislation.

Jerry’s second major impact came when he tried to enforce the Clean Air Act against the state of Pennsylvania, raising significant issues of states’ rights and federalism. Prior to Jerry’s arrival at the Law Center, his predecessor as Environmental Director had initiated a lawsuit against Pennsylvania to reduce automobile pollution by requiring tailpipe emission inspection in several counties with the worst air pollution and had obtained a consent decree in which the state agreed it would set up a system of emission inspection in those counties. Although the contracts had been awarded for setting the inspection stations up, the Dick Thornburg administration decided to cancel them and to terminate the program. It was Jerry who marched into Judge Louis Bechtle’s courtroom for an order finding the state in contempt for violating the consent decree and endangering public  health by failing to curb toxic emissions. This turned into an epic battle. Finding the state in contempt was the easy part; devising a remedy which was effective  and did not invade the state’s sovereign powers was the hard part. Jerry came up with the solution of withholding all federal highway funds appropriated to Pennsylvania, funds which would lapse if not spent within 18 months. Despite appeals to the Third Circuit, attempted stays from the Supreme Court, and state legislation denying funds for any inspection program, the orders held and the state ended up negotiating its surrender with Jerry, deciding to implement the program in every county. All of us breathe cleaner air because of this work. 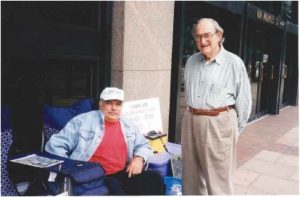 Jerry understood that government frequently was among the worst offenders in not complying with environmental laws, and he made it his goal to end that injustice. At that time Philadelphia had several trash-burning incinerators. Neighbors long complained about the stench, the truck traffic, the soot raining down on them, and the smoke. Roxborough residents’ complaints had been unavailing for many years before they contacted Jerry. Within six months he had an agreement to shut it down, because in his first deposition he discovered the incinerator could not burn at the temperatures required by its permit. The Port Richmond incinerator did not last much longer. The City’s sewage treatment plants were also sources of air pollution that caused concern to neighboring residents. Jerry found ways to fix them, often using his own engineering knowledge. He also found ways to use the Clean Air Act to end private industry from using the city’s storm sewers as dumping places for their industrial chemicals while at the same time forcing the City to upgrade its treatment processes. As a consequence the sewage treatment plant ceased being at the top of the list of sources of volatile organic compounds which are considered cancer causing. All in all, the Law Center under Jerry filed more Clean Air Act enforcement cases than any other private entity, and the impact was substantial.

When the trash-burning industry wanted the City to build an incinerator in West Philadelphia for them, Jerry had the credibility to represent the affected communities. The industry said the proposed emission limitations were safe. Recognizing the lack of confidence in government enforcement, Jerry set one condition: public disclosure of emission tests and community right to close down operations if the proposed emission limitations were violated. When the industry and the Wilson Goode administration rejected this proposal, Jerry marshaled opposition to defeat it in a City Council led by President Joseph Coleman. Despite predictions of economic doom, defeat of the contract saved the City hundreds of millions of dollars over the next 15 years as the price of landfill disposal dropped. Eventually the City itself recognized his expertise and put him on an advisory board to the Streets Department to review disposal issues.

At the end of the 1980s Jerry began to find ways to raise issues of environmental injustice, in particular of racial disparities regarding who was being affected by permits granted or permits not being enforced. Again his solutions were innovative. His first case arose from permits being granted for incinerators in the City of Chester, in a Black neighborhood. Working with coalitions led at various times by Rev. Horace Strand and Zulene Mayfield, they eventually pressured City Council into passing a zoning ordinance limiting new trash disposal operations. Because Pennsylvania’s permitting process requires compliance with local zoning, this was an unconventional but effective way to limit new permits. Jerry had devised this strategy and drafted the ordinance. He also persuaded the EPA to make the first “cumulative impact study” in its history to see not just how the proposed permit would affect residents, but how all the current polluting sources were already affecting the community.

Before these measures were in effect, Jerry had gone to federal court to challenge under Title VI of the Civil Rights Act of 1964 that Pennsylvania’s permitting process in Chester had disproportionally adversely affected minorities. No cases up to that time had successfully challenged an environmental usage or permitting system on civil rights grounds. When the Third Circuit Appeals Court refused to throw the case out, the Supreme Court agreed to hear the state’s appeal. However, before the briefs were to be written, the trash disposal company withdrew its permit application, partially in recognition of changing economics of trash disposal and partially because of the difficulty in meeting the increasing permit requirements. In any event, no new trash burning or transfer operations have been approved for Chester. 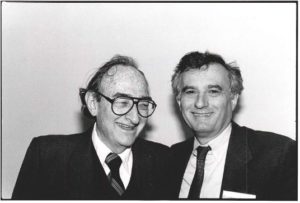 Dismayed by how little help was available to communities from the EPA and how little it responded to complaints, Jerry worked to expose that record of inaction, filing the first freedom of information requests for the history of complaints and analyzing the reported decisions. But he also sought to develop positive alternatives that would protect communities. That was the genesis of his “Vulnerable Communities Act.” This act looked at particular health criteria and ranked communities on the basis of their health outcomes. For the lowest ranked communities (whether it was or was not a minority community), he would prohibit new pollution sources on the simple grounds they should not be subject to more stress of pollution, whether or not it was deemed at a “safe” level. It was too revolutionary an approach for the times. Fifteen years later, these issues of governmental inaction (see Flint) and environmental measures to address health concerns in minority communities are still awaiting solution.

It is worth noting many of Jerry’s cases came to him when public officials told citizens to seek his help. As public officials knew, Jerry was about getting problems fixed. But as client after client would say, Jerry was more than just technical solutions, he was a friend, a support for communities without much hope, and an inspiration about what activism, organizing, and optimism could accomplish. In all of his cases, there was a passion for justice—that the law should respect the needs and rights of those outside the power structure. His legacy is better health in many places and communities and individuals inspired by a vision of justice because Jerry showed how it could be done.

For more, read Jerry’s obituary at the Philadelphia Inquirer.