Law Center to re-launch myphillyschools.com after Pennsylvania Department of Education fails to act on 825 allegations of curriculum deficiencies in Philadelphia. 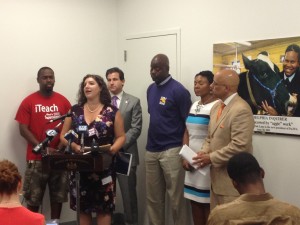 Staff attorney Amy Laura Cahn provided an update on the Philly Complaints Project and myphillyschools.com at a press conference on Thursday hosted by State Senator Vincent Hughes. In 2013, the Philly Complaints Project provided an opportunity for parents, caregivers, students and teachers to register their concerns about conditions of Philadelphia District schools with the Pennsylvania Secretary of Education.

As many as 825 allegations of curriculum deficiencies occurring within the District were collected and forwarded to the Secretary, many of which were submitted through myphillyschools.com, a web site set up by Parents United for Public Education and other groups and elected officials.

However, Ms. Cahn said, “Even though Pennsylvania law unambiguously obligates the Secretary of Education to investigate allegations of curriculum deficiencies, the Pennsylvania Department of Education has declined to conduct any meaningful investigation, let alone to take corrective action.”

The complaints cover a wide range of deficiencies, many of which were also referenced by State Senator Hughes at the press conference. Click here to read his fact-finding report on school conditions from last school year.

The allegations tell stories of elementary schools without a single guidance counselor, physical education teacher, art teacher, or nurse; of the decline in educational quality because students feel unsafe in school; and of physical conditions, particularly unsanitary toilet conditions, that interfere with a child’s capacity to learn, among many others.

The re-launch of myphillyschools.com will serve as a mechanism for parents, caregivers, teachers, and students to document the crisis conditions with which Philadelphia’s young people are forced to live.

Ms. Cahn said, “It is critical that people throughout the city, state and nation understand the everyday reality that underfunding has created for Philadelphia public school students and their families.”

The Law Center is planning to file a lawsuit based on these complaints.